Every week, my girlfriend Marissa of comeexploremyworld.blogspot.com and I leave work and have dinner together on the Lower East Side of Manhattan in order to better explore the neighborhood and its offerings. We fondly refer to this night as Maverick Monday, as it is the perfect way to catch up on the previous week/weekend and to kick off the new one, and also to strategize world domination.

Our latest excursion found us at The General (http://emmgrp.com/restaurants/the-general/), a “bustling destination restaurant serving up modern Asian cuisine, including sushi specialties and assorted items from the robata grill, in an inspired and imaginative style,” as their website states. This “multi-concept restaurant seamlessly straddles dining atmospheres ranging from a seasonal sidewalk café to a social high-top dining space and an acclaimed Jazz Room, where guests can experience The General’s full, a la carte menu set to the sounds of an authentic, live jazz experience.  Featuring fare that is both grounded in technique and elevated by flavor The General carves out a niche as a something-for-everyone space…” What better way to experience this than to go during NYC Restaurant Week, when prix-fixe menus in the city’s top restos abound? Luckily, The General was on the list.

The décor grabbed us immediately, the hostess not so much. Therefore, I have pictures of the atmosphere and none of her. 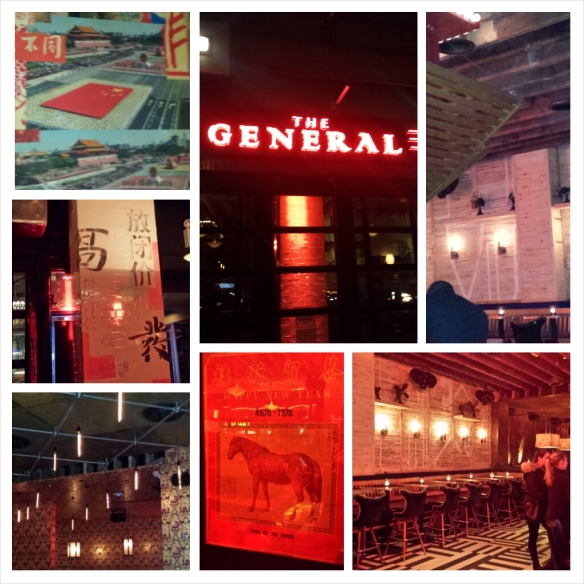 The black and white floor was one of my favorite features, and I really liked the Chinese characters painted on the subway-tiled columns, as well as the wallpaper depicting the Forbidden City during the Cultural Revolution. Even though I’m not a fan of Chairman Mao’s face, everything came together very nicely; old fused with new in our surroundings made for a nice touch on food that suggested it would do the same. With Top Chef Season 3 Winner Executive Chef Hung Huynh, at the helm, I figured we shouldn’t be disappointed.

After handling the important matter of ordering drinks, which all had fun and creative names…

it was time pick what we’d be eating while planning our world domination (the main reason for Maverick Mondays, naturally). We ordered their renowned Chinese Chicken Tacos, Mercy Roll (spicy tuna sushi), Spicy Schezuan Chicken, Lemongrass Shrimp, and Hung’s Fried Rice (with Chinese sausage and a fried) as a side dish. To round out the meal we had the famous Green Tea Doughnut and Sticky Coconut Cake for dessert.

My brief and amateurish critique: The tacos were reminiscent of Sloppy Joes, only with ground chicken instead of beef; the only difference is that the sauce was slightly more sweet-and-sour like with scallions added to the mix. I could’ve made this at home, and probably done a better job of it. I enjoyed eating it while I was there, however in retrospect, it wasn’t worth the hype. At all. I didn’t eat the Mercy Roll, but it looked like a typical spicy tuna maki roll to me, only with a pesto-looking sauce for dipping. Not impressed. The Lemongrass Shrimp (apologies, no pic) was tasty and perfectly cooked, but not unique in flavor and the portion was rather small. My Spicy Schezuan Chicken (again, no pic) was the biggest portion of all, yet it wasn’t spicy, and it got saltier with every bite. My neighborhood Chinese takeout spot is 1000x better and cheaper. Thank the food gods for Hung’s Fried Rice, the best savory dish of the night (as depicted by my the nutty Marissa). Without it, I would not have been able to swallow my salty chicken. The perfect blend of sweet and savory, the Chinese sausage and fried egg were a treat to my flavor-starved taste buds. This dish singlehandedly reminded me of my childhood and saved the meal for me. And then there was dessert.

Oh my god, the desserts were amazing! The stars of the night! The Sticky Coconut Cake was just sweet enough, thanks to the coconut water sorbet that tempered the sweetness of the cake and the candy pineapple & mango sauce. The portion was extremely small though. I was finished in three bites and ready to move on to the more substantial doughnut. This doughnut, replete with green tea mascarpone cream was the undisputed winner. One bite of this (with a little lemon honeycomb drizzled on top) made be forget everything I ate previously and had me thinking this meal was delicious and a repeat. We were even discussing how great the place would be for an event! Now that I’ve calmed down and had awhile to reflect on the meal in its entirety, I can soberly say that this meal was extremely overpriced (the Restaurant Week menu was a savior to our pocketbooks), overrated, and underwhelming. If not for the décor, company/conversation, fried rice and dessert, this experience would be forgettable. I’d rather go to China Grill; they’ve never disappointed me in quality or quantity. This meal had me rethinking the integrity of Top Chef…

I guess the hostess was the perfect indicator restaurant itself: she was cute, but she totally missed the mark.
Oh well, until next time… Mavericks out!