I’ve been on a reading binge a of late, sacrificing hours of YouTube watching and my DVR’d shows are collecting dust in my queue. However I’ve been rewarded with some really good literary escapes, another of which I will briefly share with you, as I have another book on deck of which I’m itching to delve.

Not even five minutes ago, I finished reading The Art of Hearing Heartbeats, by German author Jan-Phillipp Sendker. 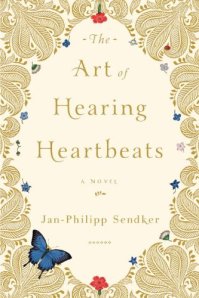 A poignant and inspirational love story set in Burma, The Art of Hearing Heartbeats spans the decades between the 1950s and the present.  When a successful New York lawyer suddenly disappears without a trace, neither his wife nor his daughter Julia has any idea where he might be…until they find a love letter he wrote many years ago, to a Burmese woman they have never heard of. Intent on solving the mystery and coming to terms with her father’s past, Julia decides to travel to the village where the woman lived. There she uncovers a tale of unimaginable hardship, resilience, and passion that will reaffirm the reader’s belief in the power of love to move mountains.

Once again, the synopsis made me cringe, due to how sticky-sweet and corny it sounded. I decided to give it a try anyway because I enjoy writers from other countries, I like reading of tales set in lands other than my own from time to time, and I also feel that non-native English speakers use the English language quite differently and are able to express themselves in unexpected, yet greatly welcomed, ways–their perspectives on universal experiences, truths, emotions come to life differently on the page and on the screen, and I love it (usually, but definitely not always).

Beautifully worded, this book attempted to tackle the subjects of familial and romantic loves in a somewhat fantastical way. Unfortunately my heart was slightly more detached than I would have liked and thus caused my enthusiasm to wane over the past few days. The story was good, the characters were even better, however I just feel (even now as I write this) that something just didn’t quite hit the high note–especially for the fact that the author never addressed his love, or possible lack thereof, for his children, namely his daughter Julia who made the physical and emotional journey to uncover her father’s mysteries. Disappointing. The bones of all the characters were strong, as was the premise of the story; however, for all the talk of hearing heartbeats, mine was just a murmur.

On to the next tome.

1 thought on “Hard of Hearing”